My grandfather moved from Washington to Alaska in 1940 to work, hunt and play in an environment that he felt was a better, safer, healthier and more enjoyable place to raise his family. He died in 1977, three years before President Carter doubled the size of the country’s national park and refuge system and tripled the amount of land designated as wilderness by signing the Alaska National Interest Lands Conservation Act.

ANILCA was supposed to ensure that Alaska and Alaskans were treated differently by the federal government. And, boy, have we been treated differently. Just ask Jim Wilde. You might you remember his case, in which overbearing National Park Service rangers tried to make Mr. Wilde stop his heavily loaded hunting boat on the Yukon River for a boat inspection.

For safety reasons, Jim didn’t stop at the precise location the feds specified. The rangers pulled guns and roughed Jim up before hauling him off to the Fairbanks jail. He was found guilty of boating violations and made an example of by the court. Unfortunately, the issue of whether the feds could enforce state regulations on the state’s property (which includes all navigable waters) never made it to court.

John has hunted up the Nation River (a tributary of the Yukon River) for 45 consecutive years. The Nation is a shallow, rock-filled river which has belonged to state of Alaska as titled property since statehood. The Nation River is navigable, but is very difficult and technical for the conventional riverboat. Therefore, John started using a small, 10-foot hovercraft to get to his traditional hunting spot. After John had used the hovercraft for 20 years, the feds passed regulations saying you couldn’t use a hovercraft to access that area.

I was hunting up the Nation River in 2007 when John had started toward his camp on the same river with his hovercraft. National Park Service rangers stopped John and told him he was in violation. They said he’d have to get the hovercraft off the river, but he couldn’t drive it home. That meant John had to get a conventional riverboat back up the rock-filled, treacherous river so he could load his hovercraft in it to comply with federal regulations. 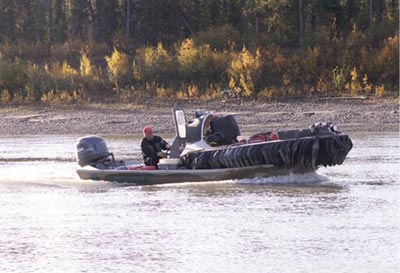 This time, the feds picked on the wrong guy. This incident struck John as an example of arrogant federal overreach, so he went to court over the regulations and the heavy-handed federal action. The case was tried in federal court, and he lost. He appealed to a higher federal court and lost again. Next, he appealed to the U.S. Supreme Court.

The Sturgeon case is about much, much more than whether John can run a hovercraft up the Nation River. It is about what control the feds can assert on Alaska’s navigable waters by simply making arbitrary regulations, which they have been doing since ANILCA became law. This has to stop.

John has lots of legal support. The state of Alaska has joined his suit, and seven Alaska Native corporations, as well as the Alaska Outdoor Council, are behind him. A dozen other states are fighting the federal government on similar state sovereignty issues.

Court fights this lengthy are a spendy venture, and the Alaska Outdoor Council is collecting funds to help further the case. If you’re of a similar mind to John and myself, you can donate online at the council’s website.

Let’s do this. If we win, it will be a game changer for Alaska’s relationship with the overreaching, overbearing feds. We’ve been waiting 35 years for a test case on the issue of federal overreach in Alaska, and this is it. The opportunity may not come again.

Craig Compeau is a 56-year resident of Fairbanks, as well as an avid hunter and fisherman. He is active is statewide access issues as well as being part of a 70-year-old, four-generation Fairbanks recreational products business.